Home Islamophobia A Kurdish Woman “Thanks” the West for allowing Turkey to Massacre her...

After the West stayed silent as Turkey allowed jihadist forces to massacre her Kurdish people in Afrin, Syria, this Kurdish lady does not remain silent! She shows her sarcastic ‘appreciation’ for the entire Western world for abandoning the Kurdish people who defeated ISIS and saved the West.

The Kurds are a stateless people. They deserve their own state, yet the world has yet to help them achieve this. The Kurdish people are oppressed by the Shia Iranians and the Sunni Muslims. They don’t get a break from anyone. Everywhere they live in the Middle East they have to be on alert to survive under the Muslim rulers. Whereas Turkey initially helped the Kurds fight ISIS, today, Turkey is fighting them.

Just recently we wrote about the Turkish attacks on the Kurds in Afrin, Syria. Due to the silence of the West, Turky successfully conquered Afrin and one million Kurds had to flee the city.

The Silence of the West

As a Jew, and as an Israeli, it is infuritating that Israel gets bashed by the world community for killing a terrorist, or destroying a terrorist’s home. The United Nations passes resolution after resolution condemning Israel for protecting our citizens. Yet silence on Turkey’s massacre of the Kurds. Israel gets bashed for bombing a school used by Hamas to launch rockets, but silence when Turkey bombs a whole city, murdering innocent Kurdish civilians of all ages.

It seems like the Jews and the Kurds have the same problem with the world today. The world stands by in silence as Muslims use violence against us. Pictures of dead Israelis and dead Kurds do not lead to United Nations condemnations nor actions to save us. The world lets us be killed by the Muslim forces.

“I would like to thank the international community with all my heart for staying silent during Turkey’s recent bombings of the Kurds in Afrin.”

“I mean sure, the Kurdish people have saved America and Europe from ISIS for the last three years and sacrificed thousands of lives, just for the safety of the entire world. But I realize you are too busy watching television and shopping.”

“The people of Afrin were living their lives peacefully. Little did they know that outsiders would be invading their city.”

“Thanks to Western governments allowing Turkey to do what it wants, the jihadists of ISIS and Al-Qaeda now control the city of Afrin, with Turkey’s help.”

“These outsiders will only advance barbarism and jihadism.”

“Believe me, this would have never happened without your help. So thank you.”

“But I should remind you that you don’t defeat terrorism by allowing it to spread. Hopefully, their terrorism will not soon reach you.”

“All us Kurds want is your help in stopping Turkey from terrorizing us, but I guess that was too much to ask of you.”

“So once again, thank you.”

“One million Kurds have now had to flee their homes because the US didn’t want to stop the NATO dictator Turkey from invading and destroying Afrin.”

The following video she made months ago about the general situation of the Kurdish people. 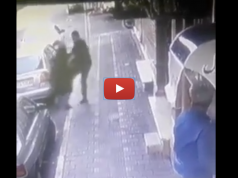 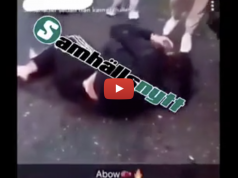