It is shocking that anti-Semitism can still be spreading across Europe. Jews are afraid to publicly portray their Judaism. The frightening truth is that we are still living in times like these.

Europe is a frightening place to be for Jewish people. Anti-Semitism is everywhere. Jews are being attacked, beaten, murdered. In Berlin, an assailant attacked a man wearing a Kippah, or skullcap. Why? Because he was Jewish. Angela Merkel even admitted that letting in Arab refugees has brought in anti-Semitism as well.

In France, an 85 year old Holocaust survivor was brutally murdered. Before setting her body on fire, the murderer stabbed her 11 times. Why? Because she was Jewish.

Mezuzahs (an important religious artifact placed on doorposts of a Jewish home and building) are being ripped out of their place. At a religious synagogue in Belgium, an anti-Semite tore a Mezuzah  off the doorpost and threw it to the ground.

Members of the British Labour party are even spreading anti-Semitism.

In Germany, some Jewish leaders were telling Jews to hide their Kippahs in public while others called for Jews and all Germans to stand in solidarity and wear Kippahs, despite some not being Jewish. And they answered the call. The gathering was the biggest support for German Jews since before the Holocaust.

It is sad that there even needs to be such a gathering to support Jews. They should not need to fear walking in public dressed as a Jew.

Even Jewish children in public schools in Europe are being tormented, just for being Jewish.

Enough is enough. When will it end? 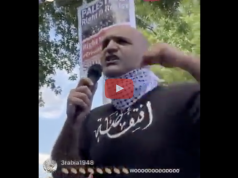