Home Israel News Are Israel and Hezbollah headed toward an all-out war?

Israel will defend itself. The world should get that clear. Even when the world won’t defend Israel as they fight terrorism, Israel will stay strong.

Israel Will Defend Itself – It Must

No matter what the news is with Israel, Israel will defend itself. There really is no choice. Whether it is Hezbollah, which is just a proxy of Iran, or Hamas, which is also backed by Iran, Israel is prepared. Israel is the only Jewish homeland. The Arabs have 22 countries. The Jews have one. As Golda Meir, the fourth prime minister of Israel said, “We Jews have a secret weapon in our struggle with the Arabs – We have no place to go.”

God. God made the Jewish people His chosen nation. And God gave the Land of Israel to the Jewish people. He will not abandon His people. Despite all the struggles and tragedy, God has always protected the Jews. And it is no different now.

Hezbollah wants us wiped off the face of the map? Well, God is on our side. Hamas? Iran? The Palestinian Arabs? The list of enemies goes on and on. Nobody knows what the future will bring and if an all-out war will take place. Everyone discusses. Everyone tries to predict the future. But there is one thing we do know: God will not forsake His nation. 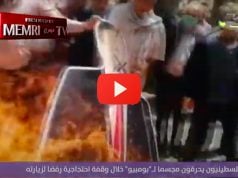