In the video, Avi Yemeni, an Australian, Israeli Jew joined his campaign for a week interviewing anybody who turned up to Tommy’s rallies and (where they would talk) the protesters shouting abuse at Tommy including the easily debunked claims that Tommy is racist or antisemitic.

Avi Yemini is a proud Jew, an ex-IDF soldier and proud of Israel. He would not be campaigning with Robinson if he had a sliver of a doubt that Robinson was a racist, anti-semite or Israel hater. (Watch the video below of Tommy’s visit to Israel). Yemini’s videos on the campaign trail are very enlightening. Here is one.

Tommy Robinson, journalist, best selling author and former leader of Europe’s largest street protest movement, is currently touring the North West of the UK campaigning for a spot as a Member of the European Parliament (MEP) in elections on May 23rd.

These elections weren’t supposed to happen: after the Brexit vote of 2016, the UK was supposed to have left the EU on 29th March this year but when Theresa May’s government failed to achieve this and the EU extended the UK’s membership of the EU, it became necessary to hold elections for new MEPs.

Despite Tommy’s friendship with Gerard Batten, the leader of the UK Independence Party (UKIP), the poorly designed rules of that party mean that Tommy couldn’t join the party or stand in elections. So Tommy is running his own campaign as an independent candidate in the North West of England.

Having been deplatformed from Twitter, Facebook, Instagram and suppressed on YouTube, Tommy’s getting out on the streets and meeting people in the working class neighbourhoods of the North West and drawing big crowds (and sometimes counter protests). Telegram has been his main platform for telling people where he’s going next.

This video of a mixed heritage (Pakistani and English) man who turned up to support Tommy and was interviewed by Avi Yemeni is another great example of how people are seeing through the mainstream demonisation of Tommy.

Tommy Robinson visited Israel in 2016 and was amazed at how much he loved the country and the people. He gave an interview on his last day overlooking the beach in Tel Aviv, summing up his thoughts. 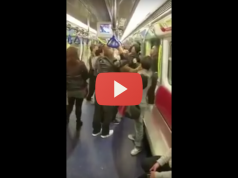