In refusing to visit Israel to receive a prize, Natalie Portman is in effect boycotting Israel. For someone who once said “as someone who was born in Israel you are put in a position of defending Israel because you know how much is at stake”, she has now stabbed in Israel in the back.

World-renowned journalist Melanie Phillips gets right to the point and calls Portman an idiot for refusing to visit Israel. She also explains why we should even care. 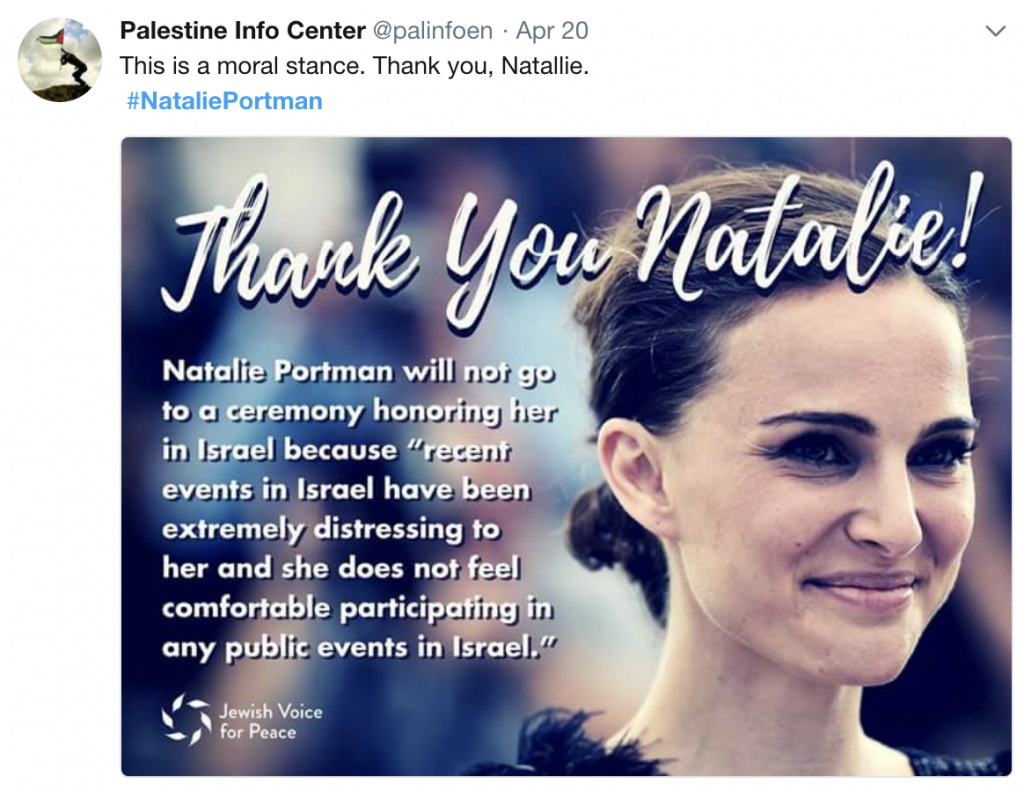 #NataliePortman and Scarlett Johansson and Israel.
One caved in to political correctness and BDS. She boycotted #Israel.
One bravely stood up to BDS pressure and Oxfam and defended SodaStream.

Who’s your favorite? Should it make a drop of difference? pic.twitter.com/OnCjuLK8z6

The whole #NataliePortman (very sad) saga, reminds me of what MK @AmirOhana said to a progressive American Jewish woman, who attacked our actions in 2014 Gaza war: ‘Protecting Israel’s Security Is More Important Than Pleasing You’ pic.twitter.com/W3AVCiVHsO

As #NataliePortman asked to be judged by her own words, it is worth repeating a thousand time:, Israel was NOT created “as a haven for refugees from the Holocaust”. Israel was created so that Jews, as people and nation, could enjoy the universal EQUAL right to self-determination.

This wave of criticism about #NataliePortman canceling her trip to Israel cause she disagrees with Israel’s PM and the “recent events” is so disproportionate! Look how she always takes a stand about international issues. No way to compare, but judging by her actions, she’s a fan pic.twitter.com/Vl5nixgFE5

#NataliePortman might be a good actress, but there is no spinning that her decision was anything short of succumbing to the BDS boycott campaign against #Israel. Shame on you Natalie! pic.twitter.com/zIt9cmOSVE

Do you think we can turn Natalie Portman away from the dark side? She is refusing to visit Israel to receive a prize because of “recent events” in Gaza, we presume. She should start following us instead of mainstream media. https://t.co/HSTSj5D4NX pic.twitter.com/Xr1dRJ1UDJ