Welcome to Pallywood.  Hollywood like staged productions that “palestinian” Arabs perform are coined “Pallywood.”  They produce the videos in order to make Israel look like killers and create headline news.

Here is an example from the recent Gaza march on Friday.

The first photo shows Gazans running from IDF soldiers.  They are fleeing the fire of the IDF. True or False?  You can then see that the photo was uploaded to Facebook, creating the narrative that the IDF soldiers shoot at innocent civilians.

The photo was captioned “The Evil Israelis shooting at these poor teenagers.  Look at them running in fear from the evil Israelis! But they are holding hands in solidarity because they will never leave each other behind. ohhh the humanity. #freepalestine

This photo was shared by thousands already.  Sound real?

Now take a look at this second photo, with a wider picture, captured by someone present at the scene. 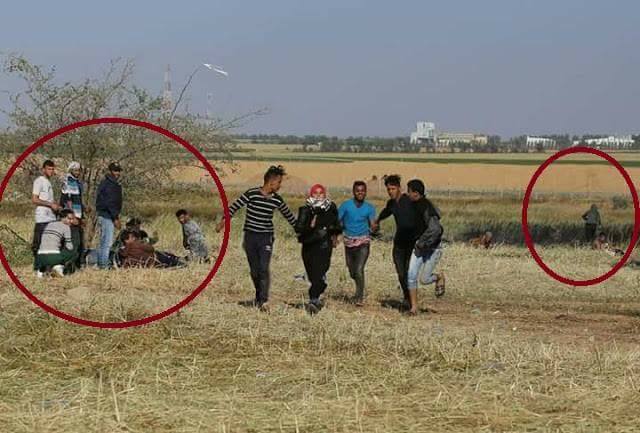 Does this still look like a scene of running away from IDF fire?

AL-Jazeera had a whole program a year ago highlighting the developed “palestinian” industry of staging of injured Arabs to make headline news.

Those artists are making children look injured. This gives us a behind the scenes look at how Hamas and the Palestinian Authority use people to lie and act injured when they see a camera.

This should put doubt in everyone’s mind whenever one see scenes of injured “palestinian” Arabs in the media.

Now that you understand how pallywood works, does that sniper scene make any sense? A guy praying gets shot in the leg, everyone else remains in prayer position and then a mob run up to the “injured” and carry him off. If it’s a shooting area shouldn’t they all be running away scared?

Just so you see how successfull these pallywood productions are in creating the headline news, look at just a few of these twitter posts with the video.

#PALESTINE 🇵🇸 | Video: A young Palestinian shot by Israeli sniper whilst he was praying today in Rafah, Gaza. | @DoaMuslims #GreatReturnMarchpic.twitter.com/6D0YA4l0td

A single shot rings out and five different Gazans fall to the ground screaming. Yet there are tons of Arabs standing all around, nobody running off scared of being right near the place where people have just been shot.

We are sure that there are killed and injured in these protests. The IDF protects the Israeli border like any nation would do. When you have 30,000 people marching towards you’re border, hiding terrorists, that is bound to happen.

Yet, the videos and pictures that go viral bashing Israel for harming innocent Arabs must be doubted until proven 100% reliable. Two decades of pallywood productions has put a huge dent into the credibility of any video or picture from the “palestinian” Arabs.