How do Christians fare in Israel?  Well, all in all – they are doing rather well in Israel.  But outside of Israel, in the countries of all of Israel’s neighbors, the Christian minorities are lucky if they are alive.  Whether it’s Egypt, Lebanon, and definitely Syria, a Christian is an endangered species at best and fighting for their lives at worst.

There is nothing new about this issue. It precedes the State of Israel by centuries.  It spans nearly the entire Middle East and many parts of Europe.  But let’s not get confused.  This is an issue that has very little to do with Israel even though their are Christian and Muslim Arabs in Israel who do not live happily together.

It is so easy to blame Israel whenever any minority has issues in an area that Israel controls.  In the first Lebanon War of 1982, Israel responded to heavy shelling in the Galilee and responded with a full-scale battle to clean up Southern Lebanon.  Israeli troops made it into Beirut where they cleaned up Yasser Arafat’s hold on the city.  Israel actually was involved in a version of nation-building as they worked with a Christian Arab group – the Phalangists – to set up a new power structure in Lebanon.  However, one major snag occurred.  Warring Arab factions took advantage of the Israeli victory and one Arab group massacred another Arab group in Lebanon.  Since Israel was in control of the area, Israel’s image took a black eye.  This despite the fact that what occurred was an Arab massacre of other Arabs.

Israel and the PA

In Israel today, nothing of this sort takes place.  Israel watches over it’s minorities and makes sure that violent Arab gangs do not endanger other Arabs.   However, today, there is another entity called the Palestinian Authority in Judea and Samaria.  They are Muslim and anti-Christian.  What goes on there is beyond the control of Israel.

However, people blame Israel whenever anything happens to a minority in Israel.  This is wrong.  It is misplaced and does not befit the Prime Minister of England. 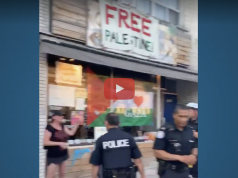