Masses of terrorists are trying to burst into Israel. Here is what the Israel Defense Forces is doing along the Gaza border. It is very revealing because the media won’t show this to you.

The truth about the Gaza border

Israel, like any other country, has borders. It sets up walls and border patrols to protect its land. Hence, it would seem natural that Israel can do what it needs to protect its land and people. Yet it’s not as simple as it seems. That’s because the border with Gaza is anything but peaceful.

The terror group Hamas took over Gaza in 2005. Although Israel had fully pulled out of Gaza, and Gazans could do what they wanted there, they ended up doing the unthinkable. They resorted to terrorism. They could have settled down and worked. Or built beachfront homes. They could have built schools and studied and done something productive with their lives.

The Gaza border in reality…

But instead they chose terror. They focused their efforts on violence. Instead of building schools, they built bombs. They could have had a beautiful future, however they chose war. Hamas Gazans chose to attack innocent Israelis. They attacked the border and tried to get into Israel to kill Jews.

The border has turned into a focal point that Israel needs to defend. Hamas, the terrorist government, is leading its citizens to violence once again. The Arabs approach Israel’s border and start to attack it. They arrive with weapons. The Arabs start fires and try to burn the fence. Their goal is to break into Israel and kill.

Yet for some reason, the media blames Israel for defending the Gaza border from terrorists! This is so backwards. Israel deserves a gold medal for stopping the terrorists and keeping its citizens safe. Yet the media blames Israel. This is a perversion of everything that is right and true. The video helps explain the situation along the Gaza border. 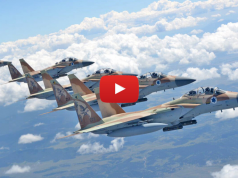