This is just absolutely disgusting. What kind of culture promotes this? How can a people attack others on such a holy site?

Holy Site for Jews – AND Muslims?

The Muslims claim that the Temple Mount is holy to them. They say it is a holy site. But have you seen the way they treat it? Throwing rocks and chairs at Jews going to the Temple Mount is appalling, to say the least. Is that how people act at a place that is considered holy? It is insane! Muslims attacked Israeli forces as well as civilians on Jerusalem Day. Police were ordered by the commander of the Jerusalem district, who came to the scene and gave orders, to enter the Temple Mount and control the situation. And of course, this isn’t the first time. The Muslim riot all too often.

Jews want to PRAY at the Temple Mount. They want to do something peaceful. When Muslims pray, they put their backs toward the Temple Mount and face Mecca. They riot. They play soccer. The Muslims most definitely do not treat it with respect.

The riots began on early Sunday morning as Jews began to come to the Temple Mount to celebrate Jerusalem Day. It has been 52 years since the Jewish people regained control of the old city as well as other parts of Jerusalem and Judea and Samaria. The Temple Mount is not yet really in our hands though. But hopefully soon it will be. We celebrate the miracles up until now and hope for the continued rebuilding of the Jewish homeland with God’s presence. 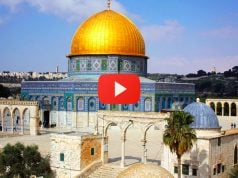 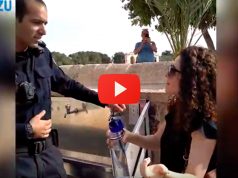 Group of Jews barred from drinking from water on Temple Mount 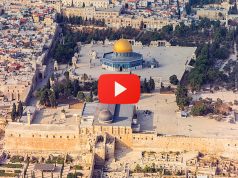 Israelis fight terrorism by going up to the Temple Mount