English media personality Katie Hopkins visited the Israeli security barrier and reports that what she saw is exactly what America needs.

Katie Hopkins visited Israel to learn about the situation and inform her followers of the truth – from Israel. She currently works with the Rebel Media outfit. This trip has been an eye-opening experience for her and for all who watch her broadcasts from Israel.

Israel built the barrier during the violent Arab uprising, called the second intifada, that began in September 2000. The Israeli government defended the building of the barrier as 100% necessary.  Plain and simple – it stops waves of violence inside Israel.

Until Israel built the security barrier, there was no physical barrier separating Judea and Samaria, aka the West Bank, and the rest of Israel. However, in the early 2000’s, after massive amounts of Arab terrorist suicide bombings and bus bombings, things changed.

The Arabs like to blame the terror of the early 2000’s on Israeli Prime Minister Ariel Sharon’s Temple Mount visit. However, there is clear evidence that Yasser Arafat and the Palestinian Authority planned and incited the uprising.  Sharon’s visit to the Temple Mount was just an excuse to tell the world that it was all Israel’s fault.

It was a very scary time period in Israel. You simply didn’t know whether you or your children would come home alive.  Suicide bomber terrorists blew up random locations and city buses all across the country. People innocently got on buses to go to school and work and then found themselves dead or injured.  A Muslim terrorist suicide bomber – usually from the West Bank – would detonate him or herself on the bus, killing and seriously injuring all the passengers.

Building the Barrier to Stop the Terror

The terrorists smuggled in bombs and themselves from Judea and Samaria, aka the West Bank.  Israeli PM Sharon and his government decided to build the security barrier to help stop this terror offensive.

The government approved the plan in June 2002, yet most of the barrier was completed only in 2006.

The barrier seriously hampers the ability of the Palestinian Authority, Hamas and other Muslim terror organizations from carrying out more suicide bombings.

Before the security barrier was built, 73 Arab suicide bombings were carried out from the West Bank, killing and injuring innocent Israelis. After the completion of the first continuous segment through the end of 2006, there were only 12 attacks based in the West Bank.  The next year, the number of terrorist attacks were far less in number than in previous years.

Opponents of the Barrier

Barrier opponents say that the barrier allows Israel to grab land that the “Palestinian” Arabs want as part of their state.  The critics say that Israel simply uses the wall as a fake security measure. Furthermore, they claim that it undermines peace negotiations by unilaterally establishing new borders.

Yet, these claims are utter lunacy.  The constant terror policy of the Hamas and the Palestinian Authority undermines peace negotiations.  A wall only serves as an incentive to bring the other side to the negotiation table.  Israel built the wall in order to put and end to the horrendous terror attacks.  It is clearly working.  That is why the Arabs complain about it so much.  It stops them.

Katie Hopkins saw the separation barrier with her own eyes.  She didn’t need to imagine how effective it is.  No need to travel to China.  It is obvious to anyone who looks at Israel’s small wall.  Now she advises America to set up a similar barrier on America’s southern border.  This seems like a popular idea in today’s day and age. 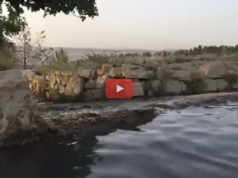