Did you just hear what Linda Sarsour did? She is dehumanizing The Jews of ISRAEL! That is exactly what the Nazis did!

It is sickening to think that a person who uses Nazi tactics is a darling of the Democrat party!

How do you think the Nazis got regular, normative Germans to turn into genocidal monsters who easily murdered innocent men, women, children and elderly? They dehumanized the Jews! Over a period of time they persuaded Germans that Jews are sub-human. That then allowed normative Germans to commit mass murder.

This is the exact tactic that Linda Sarsour is using today.

She must be stopped!

And by the way, “palestine” is not a human rights and social justice issue. The agenda called “Palestine” is the worst form of Jew-hatred that exists today, a modern blood libel against the Jewish people that allows normative people to soothe their conscious for hating Jews.

Israel is what is good about the Middle East, a beacon of rights, freedom & equality for all, in a sea of Muslim intolerance and terror.

Israel is a solution to the problems of the Middle East. The world is getting sick and tired of the fake issue called “palestine” that represents hatred, murder and destruction.

Any moral person supports Israel. Those who support “palestine” replacing Israel are the immoral ones. 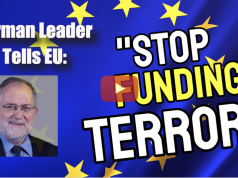