Miss Iraq just made history. How often do you hear a speech like this at the United Nations coming from someone like her?

Sarah Idan, or Miss Iraq, did something brave, once again. Although she received death threats for posting a picture of her with Miss Israel on social media a few years ago, and although she can no longer go back to Iraq, she is still willing to stand up for the truth. She called out all the Arab countries at the UN for their antisemitism and complete hatred of Israel. All these Arab countries spread lies about Israel and the “crimes” they commit against Palestinian Arabs. But that could not be farther from the truth! And Idan came to share the facts.

What is the Reality?

The truth is, the media does not share the truth. They did not share when Hamas fired 700 rockets at Israel in one weekend. They never share when Hamas uses Palestinian Arabs as human shields. Sarah brought up another important point: Israel’s responses are just that – a response to something that was instigated by the other side. Israel’s responses are self-defense. But all the media will show you is the people who were killed while Israel tried to defend itself. They never show you the brave young Israeli soldiers who are murdered by terrorists. They never show you the children who are killed for being Jewish.

The media will never tell you about it. But Miss Iraq will. 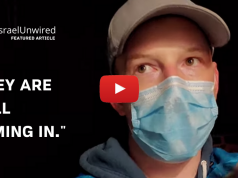