Jews and Bedouin live all around Israel’s south. Bedouin are not like the rest of the Arab population. In some ways, they present a major challenge to the Jews in the Land of Israel that is greater than any other group.

The Bedouin are a motley assortment of nomadic Arab people in many areas of the Middle East – including the State of Israel. They are most comfortable in the desert. Everything about them is unstructured and tribal. They herd camels and goats and move around often as the season’s change.

There are tens of thousands of Bedouin in Israel – perhaps more than a hundred thousand.  Most live in areas near Be’er Sheva, Israel’s capital of the Negev – southern Israel.  A few thousand even serve as volunteers in the Israel Defense Forces. Interestingly, many actually serve as trackers in some of the Israeli Army’s elite tracking units.

However, the cup is more empty than it is full.  Each year, there are more Arab Bedouin heading towards radicalization and anti-Israel attitudes.

Why?  It is an interesting question.  On the one hand, they will gain so much if they were to become modernized and less anti-Israel.  The Israeli government even went so far as to  pass a resolution that would specifically unify some illegal Bedouin settlements into a group of legal settlements.  This then would afford them official municipal status.  This is a very important move.  It means that all basic services of a typical Israeli neighborhood such as medical care, busing, and infrastructure become normalized.  Normal schools, postal offices, running water.  These are things that many Bedouins simply don’t have.  Israel is currently building or enlarging 13 towns and cities in the Negev.  Even new industrial zones are part of Israel’s plan in order to combat the high unemployment rate.

However, the bottom line is that the vast majority of the Bedouins in Israel are illegal squatters.  So, Israel is working to relocate tens of thousands of Negev Bedouin into government-approved townships and continue to work on improving their standard of living.

Despite all of of this, more and more Arab bedouin are choosing the path of radicalization and hostility towards the State of Israel.

Meir Kay highlights in this video one bright light in the battle to keep up the fight towards a brighter future between Jews and all of their neighbors in the State of Israel. 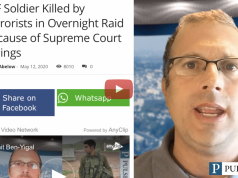