Home Politics Our law enforcement doesn’t trust CAIR, so why do you?

If America’s own law enforcement does not trust the organization CAIR, why would anyone? Don’t be foolish. It’s worse than you think.

CAIR stands for The Council on American–Islamic Relations. It sounds innocent, but it is anything but innocent. The FBI broke all ties with CAIR. It should be clear that if our law enforcement doesn’t trust them, neither should Americans.

This video should concern every American. The facts are clear. Brigitte Gabriel is speaking the truth, and no one should ignore it. CAIR has terror ties. They have stated that they want to take over America. Rashida Tlaib and Ilhan Omar being in Congress is just the start. They do not plan to stop there.

It is not About Racism

This is not about people being against CAIR because of Islamophobia or racism. This is about CAIR being made up of terrorist-sympathizers. We are talking about people who hate America and want to destroy it from within.

As Gabriel said, “We welcome people of all faiths to run for whatever office they want. But we will not stand for America-haters and terrorist-sympathizers to influence policy and transform America.” It has nothing to do with what religion someone is. It is not about if they are black, white, or yellow. This is has to do with protecting America from people who do not want it to exist! Americans need to stop being so scared to admit the truth. They need to start standing up for America and American values, even if it means that they will be labeled as racists. It is more important to know that you are defending America, despite what others may claim. 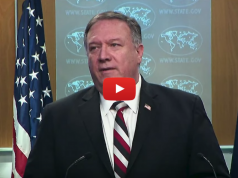