The whistleblower who speaks in the video is Yasser Jadallah, a former senior official in the office of PA President Abu Mazen. He is said to have worked for the Palestinian Authority’s intelligence services and was close to Abu Mazen”s own family.

Listen to Yasser! The money donated to the PA from abroad goes right into Abu Mazen’s secret bank accounts. After the exposure, Yasser was forced to flee and seek asylum in Belgium. Yet the EU, UN, European countries, and even Israel, continue to give billions of dollars in “aid” to the Palestinian Authority!!! As I always say, “palestine” is the biggest scam, and financial scam, in history.

The whole cause called #palestine is one HUGE lie. The biggest financial scam in history! They fail in destroying Israel, so they cry to the world, the receive billions of $ in international aid that they use for terror & for their leaders to pocket. #palestineisascam https://t.co/o7UBfzz3ta

When the Israeli government gives the PA a loan of NIS 800 million, the money goes to killers of babies in their beds or to Abu Mazen and his sons directly. The money is not helping the health of Arabs living under the Palestinian Authority.

The Kohelet Policy Forum Published the video with the following statement:

An exclusive video that reveals, from an insider, the corruption in the office of the president of the Palestinian Authority, Abbas.

This video also reveals the fate of aid money given to the PA!

This is an exceptional video that reveals the absurd and corrupt tactics taking place at the head of the Palestinian Authority.

This is unprecedented leak highlights, without any censorship, the shocking acts of corruption and abuse of power at the office of the president of the Palestinian Authority Mahmoud Abbas (Abu Mazen).

In the video, he describes the fate of the donations made to the Palestinian Authority by the Europeans and Arab countries, those, according to him, are routed by Abu Mazen’s confidants, to secret accounts belonging to Abbas’s family.

Reportedly, Jadallah first began by accusing Abu Mazen’s office of corruption, this resulted in trouble for him with his colleagues. He was later shot and imprisoned, before fleeing to Belgium where he is seeking political asylum. According to Jadallah, President Mahmoud Abbas, despite his advanced age (85), is not as senile as he is said and he would be aware of everything that has been done in his office. He “plays the game of corruption, even better than Abu Amar (Yasser Arafat)”.

Mahmoud Abbas gives full confidence to his financial director, Mahmoud Salameh, and to his office manager Intissar Abu-Amarrah. These two individuals control all budgets and all members of the PA administration.

The heads of PA entities and government bodies, organizations and senior officials of the PLO and the PA are fully dedicated, loyal and ready to “kiss the hand” of Salameh and Abu-Amarah so that their share of the budgets are spent smoothly without delays or trouble.

Finally, in the video, Jadallah reveals another problem called “the six-month decree” which is a major factor in hiding financial corruption within the presidential office.

Indeed, Mahmoud Abbas has issued a presidential order authorizing the financial director (Mahmoud Salameh) to destroy all of the office’s invoices every 6 months. In reality, these invoices are destroyed daily, according to Jadallah…. 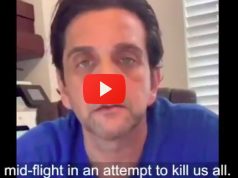