Home Jewish Holidays Rabbi Joseph B. Soloveitchik on the Miracles Behind the Creation of the...

In a 1955 shiur given at the Moriah Synagogue in Manhattan, the Rav laid out the miracles behind the creation of the State of Israel. In Part 1 he discusses the role of the UN in light of the Rambam’s introduction to the Peirush Hamishnayos.

Part II: The irony of how a wicked British Foreign Minister became instrumental in creating the State of Israel

The following was written by Dr. Moshe Sokolow on the Lookstein Center website:

On Israel Independence Day, Yom ha-Atzma’ut, 1956, the RAV delivered a public address at Yeshiva University entitled: Kol Dodi Dofek; The Voice of My Beloved Knocks. The address, which has become a classic of religious Zionist philosophy, enumerates, and elaborates upon, the instances of God’s tangible presence in the recent history of the Jewish people and the State of Israel. It also issues a clarion call to American Orthodoxy to embrace the State of Israel and commit itself and its resources to its development.

1.     “First, the knock of opportunity was heard in the political arena. No one can deny that from the standpoint of international relations, the establishment of the State of Israel, in a political sense, was an almost supernatural occurrence.”

The RAV, acknowledging the “unholy” alliance of the West and the Soviet Union in the recognition of the Jewish state, ruminates over the possibility that the entire organization of the United Nations came into being solely in order to facilitate the establishment of Israel. When the chairman of the UN General Assembly banged his gavel to call the role on that fateful Nov. 29, 1947, the RAV heard the voice of the Beloved knocking.

2.   “Second, the knocking of the Beloved could be heard on the battlefield. The small Israeli Defense Forces defeated the mighty armies of the Arab countries. The miracle of “the many in the hands of the few” took place before our very eyes.”

On the analogy of Yetzi’at Mitzrayim—where Pharaoh hardened his heart and ended up with a worse deal than was originally offered him—the RAV considers the Arab attack a blessing in disguise. Had they accepted the partition plan as voted and not attacked, Israel would have had to settle for a state that excluded Yerushalayim, a large part of the Gallil and areas in the Negev.

Note:   Considering how few high-school students today have a clear picture of the enormity of the military success which Israel enjoyed during the Six Day War, we can learn a kal va-homer to their unawareness of how great a victory was won in the War of Independence—and at what a price. Don’t forego the opportunity to address this point.

3.     “Third, the Beloved began to knock as well on the door of the theological tent, and it may very well be that this is the strongest knock of all…All the claims of Christian theologians that God deprived the Jewish people of its rights in the land of Israel, and that all the biblical promises regarding Zion and Jerusalem refer, in an allegorical sense, to Christianity and the Christian Church, have been publicly refuted by the establishment of the State of Israel and have been exposed as falsehoods, lacking all validity.”

Christianity declared the Jewish covenant with God to be terminated–that is the real meaning of the term Old Testament (in Hebrew: ha-Berit ha-Yeshanah)—and declared themselves the “new” Israel. The powerlessness of Jews throughout the Middle Ages and the beginning of the modern period reinforced this impression. The RAV speaks of the particular pleasure he derives from references to “Israel” in Christian newspapers, and experiences a special delight upon reading in a United Press release on Erev Pesah that “the Jews will sit down tonight at the Seder table confident that the miracles of Egypt will recur today.”

4.     “Fourth, the Beloved is knocking in the hearts of the perplexed and assimilated youths. The era of self-concealment (hastarat panim) at the beginning of the 1940’s resulted in great confusion among the Jewish masses and, in particular, among the Jewish youth…Buried, hidden thoughts and paradoxical reflections emerge from the depths of the souls of even the most avowed assimilationists. And once a Jew begins to think and contemplate, once his sleep is disturbed—who knows where his thoughts will take him, what form of expression his doubts and queries will assume?”

The ability, almost mystical, of even a brief visit to the State of Israel to restore—to some degree–the Jewish identities of even the most alienated Jewish youth, is the stuff of which legends are made. [Think of the story line behind Mordechai Ben David’s “Just One Shabbos”!] The RAV thinks “it is good for a Jew not to be able to hide from his Jewishness.” Like Yonah, even the self-haters will find no refuge in the innermost depths of their respective ships. Like Yonah, again, when asked “Who are you?” they should answer “I am a Hebrew, and I fear the Lord, the God of heaven.”

5.   “The fifth knock of the Beloved is perhaps the most important of all. For the first time in the history of our exile, divine providence has surprised our enemies with the sensational discovery that Jewish blood is not free for the taking, is not hefker!”

Unapologetically, the RAV argues for the moral right and responsibility of the Jewish nation to defend itself. Even though the halakhah interprets “an eye for an eye,” figuratively, as monetary compensation, the RAV argues that, “With regard to Nasser and the Mufti I would demand that we interpret the phrase…in a strictly literal sense—as referring to the removal of the concrete, actual eye…Revenge is forbidden when it serves no purpose. However, if by taking revenge we raise ourselves up to the plane of self-defense, then it becomes the elementary right of man qua man to avenge the wrongs inflicted upon him.” The readiness of the State of Israel to unleash its armies against its enemies is the surest, and most effective, deterrent to the renewal of the venomous type of anti-Semitism which declares “open season” on Jewish blood.

Note:   The raid on Entebbe, conducted on July 4, 1976, serves as the most visible and potent reminder of the consequences of treating Jewish lives with callous disregard. In this context, the RAV also cautions against substituting the promises of “the three great powers” (i.e., the US, USSR, and Great Britain) for vigilance and self-defense. “A people that cannot ensure its own freedom and security is not truly independent.” You may use this opportunity to explore with the students their feelings about American guarantees of Israeli sovereignty and security in light of the concessions already made by Israel, and those which it is still be asked to make.

6.     “The sixth knock, which we must not ignore, was heard when the gates of the land were opened. A Jew who flees from a hostile country now knows that he can find a secure refuge in the land of his ancestors…Now that the era of divine self-concealment (hester panim) is over, Jews who have been uprooted from their homes can find lodging in the Holy Land.”

Current events have, again, validated the RAV’s insight. While he had in mind the mass migration of North African and Oriental Jews of the early 1950’s, we can add the recent, and equally massive, Aliyah of Jews from the Former Soviet Union and Ethiopia. In this context, the RAV also speculates on what might have been had the State of Israel come into existence before the Holocaust?

Note:   While “Monday morning quarterbacking” is often an exercise in futility, I believe that an analogy to the RAV’s rhetorical question can be made in the deliberations of the 6th World Zionist Congress (1903) over the British proposal to establish a Jewish homeland in East Africa (Uganda). Somewhat paradoxically, the resolution was supported by Mizrahi, the religious Zionist movement. Its delegates were committed, unconditionally, to the establishment of a Jewish state in Eretz Yisrael; however, they considered the advantage of an immediate haven for the tens of thousands of Russian Jews whose lives had just been turned topsy turvy by the Kishinev pogroms. What if the resolution had carried?]

The Rav on the Israeli Flag

“If you ask me, how do I, a Talmudic Jew, look upon the flag of the State of Israel, and has it any halachic value? – I would answer plainly. I do not hold at all with the magical attraction of a flag or of similar symbolic ceremonies. Judaism negates ritual connected with physical things. Nonetheless, we must not lose sight of a law in the Shulchan Aruch to the effect that: ‘One who has been killed by non-Jews is buried in his clothes, so that his blood may be seen and avenged…’

“In other words, the clothes of the Jew acquire certain sanctity when spattered with the blood of a martyr. How much more is this so of the blue and white flag, which has been immersed in the blood of thousands of young Jews who fell in the War of Independence defending the country and the population. It has a spark of sanctity that flows from devotion and self-sacrifice. We are all enjoined to honor the flag and treat it with respect.” (חמש דרשות, p.139). 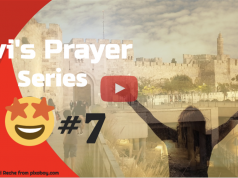 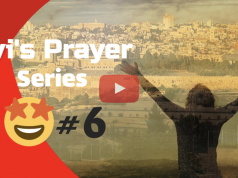 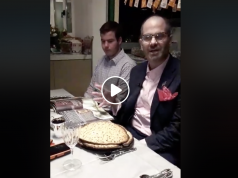