Syrian President Assad began a brutal attack on the Syrian province of Daraa. Thousands of Syrian refugees are running towards the Israeli border for safety.

#Daraa has been leveled with the ground, and now, civilians are in imminent danger again.  #Assad is about to invade the city. #Act4Daraa #Syria pic.twitter.com/JnDaSngeue

.@NLatUN, After a night of relentless bombardment by the #Syria/n Regime & #Russia, people in #Daraa are frantically digging up bodies from the rubble. #Act4Daraa pic.twitter.com/LJ5oyob0vi

.@margotwallstrom, We are warning you of the imminent danger in #Daraa. #Assad has attacked #Al_Harah & #Agrabaa in the countryside, during the 1st hours of #Eid. #Act4Daraa #Syria pic.twitter.com/9TFkr9Pn0y

What is going on?

A ceasefire agreed upon by Russia, Jordan, and the United States was protecting the south of Syria until now, which included the Daraa province.

It seems like President Assad has now gone against that ceasefire with a massive assault on Daraa. Airstrikes are devastating the city and killing many civilians.

The Syrian Observatory for Human Rights reports that “there are rockets, barrel bombs and Russian and Syrian air strikes hitting rebel areas of Daraa, particularly the Daraa al-Balad neighborhood”.

The death toll of civilians over the past week is now 56.

Around 50,000 people have been displaced by the Syrian regime’s airstrikes on Daraa.

Thousands of Syrians are fleeing to the Jordanian border and the Israeli border to escape the military bombardment.

Many of the Syrian refugees are running to the Israeli border on the premise that it will be safe. They don’t plan on crossing into Israel. But they believe Assad won’t bomb them so close to Israel, fearing Israeli counter-attacks.

News Report on the Situation in Daraa, Syria

#Syria has now turned its attention to #Daraa, where destruction and death are likely looming ahead. @ShaiBenari has the story: pic.twitter.com/iwXb1By4uU 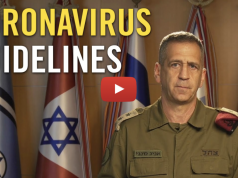