Antisemitism is real, and it exists in its worst form in the Islamic Republic of Iran and those behind the false narrative called “palestine”. Yet, for some reason most people not only ignore those anti-semites.  They also enable them!

We Live Anti -semitism every day in Israel!

Regardless of one’s views on the growing antisemitism in the USA, what is happening today in Gaza is symbolic of the worst kind of antisemitism that exists today.  Yet the Jewish world is SILENT and the rest of the world is silent as well!

What am I talking about?

1. Iran is behind the attacks from Gaza, just like Iran is poised to launch 150,000 missiles from Lebanon to kill as many Jews as possible and destroy Israel. THAT IS THE HEIGHT OF ANTISEMITISM, THE UTTER DESTRUCTION OF ISRAEL! Yet silence from US Jewry, “mainstream” Jewish organizations and media outlets. Really?

2. The whole fake people, and “narrative”, called “palestinians” are part of an overall strategy to kill Jews and destroy Israel, and again silence. The term “palestinian” is in and of itself antisemitic. It gives credence to the claim that Jews are outsiders/occupiers, and therefore “lawful” targets, according to world bodies, to be killed!

THERE IS NO BIGGER ANTISEMITISM TODAY THAN THE CAUSE CALLED “PALESTINE” AND THE IRANIAN STRATEGY TO DESTROY ISRAEL.

Wake up people! While I’m concerned about the state of American Jewry with the growing antisemitism in America, that does not compare with the ultimate antisemitism that we deal with in Israel.

Yet “most” of American Jewry still prefer to side with the Obamaesque thinking, that the Iran deal was good, and that we must make peace with our enemies, the fake “palestinian” Arabs, instead of finally realizing that they are our enemy!!!

Sorry, the left is asleep at the wheel. The worst anti-semtism is happening right here, everyday, and most of world Jewry is silent.

However, I promise you this. We in Israel will survive living here and thriving, overcoming the antisemitism that we live with in Israel, that most of world Jewry prefers to ignore. However, I’m much more pessimistic about Jews in the exile, even in the USA.

Thank G-d we are back sovereign in our homeland with our own army. No, we don’t want to kill, but we are prepared to do everything we can to protect ourselves. That is the reality. And we can never take Israel for granted, never! 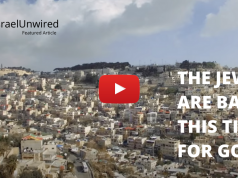