The United Nations is always attacking Israel. But is it justified? Not even a little bit. Biblically, historically, legally – Israel deserves to exist.

It is hard to argue with top attorney and Harvard law professor, Alan Dershowitz. He is not a Republican, and that is important to realize. But he does not understand what is illegal about the state of Israel. The perpetual condemnation of Israel by the United Nations is so disproportionate to that of any other country and is based on nothing that even liberal Alan Dershowitz cannot fathom what could possibly be the motivating factor.

He has one theory that seems to always be the reason for persecution of Jews. Hear him out as he discloses his conclusions about what is going on. It is such clear antisemitism.

Dershowitz also points out that Israel always chooses the pen to war. They would rather an agreement than need to fight. But, at the end of the day, they will fight to protect themselves. To then claim that Israel is an inhumane country is just inaccurate. They do not even ideally choose war.

Israel is constantly condemned at the UN while its enemies get a free pass.

When will things change? 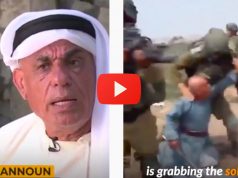 “Palestinians” use George Floyd’s story to defend a convicted terrorist