Sick! This hatred will end up destroying Western society. Us Jews will overcome it, as we have survived continuous Jew-hatred hatred for thousands of years.

Radical left-wing demonstrators attempted to disrupt a lecture by the international spokesperson of an Israeli organization called Regavim that protects Israeli lands from illegal Arab takeovers.

The London Metropolitan Police secured the event, and kept the demonstrators from disrupting the evening’s program. Kahn summed up the evening’s events: “This demonstration by BDS activists is a display of unadulterated hatred for the State of Israel. While it may be “understandable” for Muslim and Palestinian organizations to stage protests of this kind, it is truly sad to see that well-meaning Jewish activists and organizations are so grossly misinformed that they can be won over by the spurious, antisemitic claims of the BDS movement.”

Meir Deutsch, Director General of Regavim, added, “The truth is stronger than all the lies spread by BDS organizations who hide behind mantras of peace and dialogue but are unwilling to allow opposing opinions to be heard.

“Regavim will continue to present facts, and to protect the State of Israel with truth – even when antisemitic organizations take to the streets to fight us.” 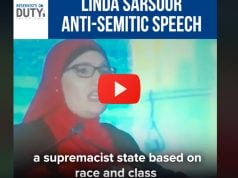