US College students are devastated and disgusted after arch terrorist Qassem Soleimani is finally eliminated in an American drone attack.

Although the above video and statements may be shocking to those that went to university 20 years ago, today’s college scene has shifted very far to the left.

“The United States has a history of violence against non-white people,” one student argued before adding that the U.S. was acting in the ‘interest of white supremacy.'”

“I was shocked and kind of…disgusted that Trump had done that,” another student added.

Other students seemed to show sympathy to Iranians over the death of Soleimani.

“There’s a lot of…sentimental feelings going on and I want to be able to like, empathize with that,” one student said in response to how Iranians feel about his death.

“I want to be there for the people who I guess loved this general, but also like, I really don’t know how bad he is,” a different student added.

While there are surely US College students who may disagree, the facts are plain to see – US college students identify with Soleimani as a hero than with the justice that backs their own country’s actions. 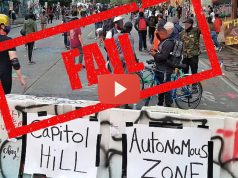