The following video of Staff Sgt. David G. Bellavia shows the resilience of the American Military and the determination it has to destroy evil.

Staff Sgt. David G. Bellavia says the following in the above video: “We will not be intimidated. We will not back down. We’ve seen war. We don’t want war, but if you want a war with the United States of America, there is one thing I can promise you, so help me God: someone else will raise your sons and daughters.”

While many of President Trump’s adversaries in the Congress, the media, and elsewhere have claimed his take down of Qassem Soleimani has weakened the US position, Bellavia’s speech tells the world the Military stands with the President.

The fact is that the take down of Soleimani proves that Iran may attack back, but it is essentially a paper tiger, given extended life by the Obama administration. 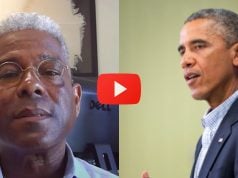