A Jewish man, peacefully walking down the street, was slapped in the face and called a “dirty Jew” in the Crown Heights neighborhood of Brooklyn, New York.

The incident took place on a Saturday afternoon before the holidays. The Jewish man was attacked by a black male riding a bicycle. He crossed in front of the Jewish man on his bike, slapped him and said “you dirty Jew,” COL Live reported.

The Jewish man immediately reported the incident at a local police precinct.

Police said that the incident is being investigated as a hate crime.

It seems that there is a big rise in antisemitic incidents, especially in Brooklyn, NY. Unfortunately, mainstream media is hardly reporting these incidents. It seems the media only reports antisemitic incidents when they can blame white-supremacists. However, all the incidents in Brookly, NY are being done by Blacks or Hispanics, showing the growth of Jew-hatred and violence against Jews from those on the left. Both the rise in the violent Jew-hating acts and the fact that the media is ignoring these incidents is doubly troubling.

These violent attacks are not slowing down; declaring a STATE OF EMERGENCY is long overdue. Yet, few are. 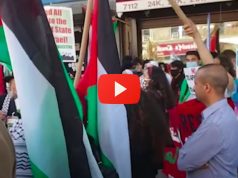