There were high hopes that the current tensions between China and India along the Line of Actual Control (LAC) had already peaked on June 15th when a hand to hand skirmish had broken out. In any other year, deescalation may have followed, but this is no ordinary year.

President Trump is the beginning of a serious effort to decouple from China. He has staked this decoupling on finding new foreign sources for US supply chains along with rebuilding the US manufacturing expertise. Trump believes that India, being a democracy and a successful one at that, is the perfect place to do two things.

The first is to enable India to begin the sort of manufacturing China has been doing and the second and perhaps most important, be the Western Block against the The Chinese Communist Party.

This second aspect troubles Beijing the most. It is one thing dealing with South-East Asia, but there is another dealing with Modi’s India. Prime Minister Modi is a Hindu Nationalist and is considered a hero to most Indian Hindus who make up the overwhelming majority of the billion plus nation.

The current rising tensions and the increase troop buildup along the LAC between India and China means this impasse is not settling down but rather gearing up for something else.

China is moving 10,000 troops to the area and India will probably do the same. While Trump believes he can squeeze China from the West and East, it may not be that simple.

Will Israel Be Caught In Between?

Israel has serious trade and cooperation agreements with both India and China. However, juggling both China and India, US looming over its shoulder, may be too much for Israel. It will have to ally itself with the US if it wants to make it through this. Then again, with US election less than 60 days away, Netanyahu may stall to see who wins.

A Biden win would reverse Trump’s approach and freeze decoupling. Netanyahu may want to wait to see if it is better to take a more neutral approach. Then again events may not allow that. 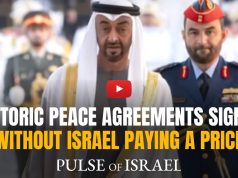