The Maccabees were an enigma in Jewish History. How did such a small number of Jews fight back the masses of Greeks that massed against them in order to destroy their religion? There is no logical explanation for how hundreds of soldiers could beat back tens of thousands of enemy soldiers. That is the essence of the miracle of Chanuka that is celebrated to this very day by Jews around the world.

How symbolic is it that Israeli soldiers light the candelabra on Chanuka. They are doing exactly what the ancient Maccabees did nearly 2,000 years ago. The Menora (candelabra) symbolizes the faith that the Jewish people have in God and in His ability to literally perform miracles for the Chosen people in the Chosen Land. When an Israeli soldier – in uniform – stops his daily regimen to light the candle and praise God for His deliverance, it is exactly the right thing to do. It is a refocus as to the source of the strength of the Chosen People in the Chosen Land. 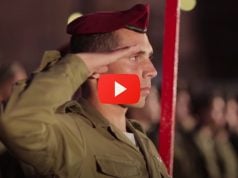