Israeli leftists are out in the streets protesting. Not protesting any lives, just protesting against our Prime Minister, Benjamin Netanyahu. Right now they are only illegally blocking traffic. Take a look.

Thank G-d, It’s nothing like what’s happening in New York City or Portland or London.

But I have been vocal about this dangerous black lives matter and antifa anarchy, warning that it would spread around the world and even be copied by our leftists here as well. Thank G-d right now they’ve just blocking traffic. But we can not afford to have our policemen or soldiers act, or not act, like the police in NYC, Portland, London or any of the other cities where policemen have no backing from the politicians to act.

We have terrorists trying to kill us everyday. And any form of weakness will be very deadly for us.

In the meantime, the leftists in Israel are complaining that their rally leader was arrested for blocking traffic. Yet, they were silent years ago when us right-wingers were arrested on mass for protesting the horrendous Oslo accords of 1993 and the disastrous Gaza disengagement in 2005. 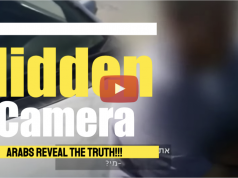