Home Jewish People US Ambassador to Germany did something to stand with Jews that many...

The US Ambassador to Germany, Richard Grenell, is a good friend to Israel and the Jewish people. And he has proved himself yet again with this move.

US Ambassador to Germany

Being a US Ambassador to Germany during a time of rising antisemitism can be challenging. But Richard Grenell has stood up to the test. Jews in Germany were warned not to wear their Kippahs – or religious head coverings – in public. Just over 70 years after the end of the Holocaust, Jews in Germany again have to fear for their safety. But Grenell did something that took guts. He decided to wear a Kippah, too. Richard Grenell is not Jewish. In fact, he is a Christian. But he loudly and proudly is showing he stands with and supports the Jewish people.

“Be proud, and wear your kippah.” It is simple, yet it is powerful. The US Ambassador to Germany is telling the Jewish people not to be afraid. We cannot give in to the antisemitism. If Jews stop showing their pride, the wrong side wins.

Grenell is not saying his message without acting. He is not telling them such a strong statement while he sits back in his office. Richard Grenell is also being proud and wearing his kippah. And if he can do it, so should we. 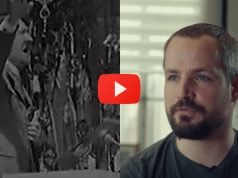